Home > Case Studies > The Importance of My Ex in My Child's Life: A Case Study 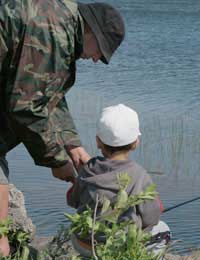 Libby, 42, says that although the split form her ex was acrimonious, she would never stop him from seeing her two children because she knows how important he is in their lives.

“Maintaining a healthy relationship with my ex hasn’t been easy. We split up because I found him in bed with our next door neighbour so as you can imagine, he is not my favourite person in the world. However, whatever I may think about him as a husband, he has always been a good father and my children adore him.

“When we first split up I tried really hard but it was difficult to hide my pain from the kids. I didn’t want them to think badly of their Dad, even though I was furious at him, so I made a huge effort never to say bad things about him in front of them. As hard as it was, I am really glad that I managed that because they still look up to him which I think is important.”

Why Their Dad is Important

“To my son, who is eight, his Dad is his hero. He takes him fishing, plays football with him and wrestles in the garden – all things that aren’t really in my repertoire! As for my daughter, she is just heading into her teens and dealing with all the self-esteem issues that come with that age. Her Dad showers her with confidence and I think it is important for a girl’s self-confidence to have a positive male relationship in their life.

“So, as much as I would have love to tell him to go to hell, those are the reasons why I couldn’t – my beautiful children. I couldn’t take their Dad away from them just because he had let me down because otherwise I would be letting them down”

Libby and her ex have worked hard to stay civil to each other, but she says it has been difficult because he has moved on and started a new relationship.

“When my daughter came home and said they had met Dad’s new girlfriend I was in shock. I guess I knew he would move on but to hear it was happening so soon made all those emotions come flooding back. I was so mad and upset, especially at the thought of my children spending time with her. I guess, if I’m honest, I was afraid that they would have this happy new family that would seem more appealing to the kids than just little old me.

“I made the decision to meet her and when I did I realised that I she wasn’t some child-stealing ogre and was actually good for my ex. He seemed much calmer and she encouraged him to Communicate With The Children and try to understand them better. Although I never wanted our lives to turn out like this, I think my children have a lot of positive influences in their lives and hopefully, by keeping relationships civil, they will grow up to be happy and well-adjusted.”

How I Felt When My Parents Separated: A Case Study
Share Your Story, Join the Discussion or Seek Advice..
Hats off to all the woman out there that consider their children and not themselves. I can't find the words to explain what it has done to my son, myself along with my entire family! Emotional distress is huge so imagine the emotional distress that the kids are suffering. We still haven't found them yet but we will not stop until we do! I never knew that people did this to their children Libby is awesome!!!!!!!!!!!!!!!!!!I love your story. My son is fair game he just wants to love his kids.
momma - 17-Feb-15 @ 4:14 AM
Hi Libby do you know how proud you should be for your fairness, it is a pity a lot of mothers are not like you. Children need both parents it is hard enough for them to be in the middle of a breakup, without the parents getting along for the sake of the children , puts them in a turmoil and then they grow up as bitter and jealous women, it also makes life easier to share no matter what you feel about your ex. I have lost contact with my eldest granddaughter because my son's ex ( that he got along with) moved a boyfriend in and has followed the brainwashing pattern to a tee, in fact she could of written it , as it rings true of our situation, my granddaughter adored my son and myself but seems to have been overtaken by the mother and boyfriend. Then men have to go to court to get to see their children it is so very very sad as we have had to do, lots of money spent when a bit of mediation could of sorted it all out and instead we are left with a void in our lives, and brick walls ahead. so good on you Libby
edda - 1-Apr-14 @ 11:27 AM
Hi Libby This is the firs time I have read this story and you life has probably changed significantly since you wrote it..... I had to reply because I am the girlfriend of a father of two and only wish my partners ex was as amicable as you.... We have gone though hell because of my partners ex (they had split up 2.5 years before I met him) and he has almost lost his children because of the situation... They split up amicably and like your ex, my partner is a good father, he, for 2.5 years maintained a great relationship with his kids and when I met them, we all got along really, really well... it was perfect situation.His ex didn't want to meet me but didn't interfere with our time with the kids... This all changed when we moved in together (almost a 6 months after getting together) and his ex completely changed.... reading your story has helped me understand her feelings (about him moving on) but unlike you... she wasn't happy that the kids loved me.... she told the children that their father had stopped loving them as much because I was living with him and started changed the times he spent with the kids and would tell them that he had cancelled etc... needless to say the kids were confused and hurt.... His ex sent e-mails demanding more money (because of my income), contacted my friends to find out about me, stalked us on facebook (she signed in as her daughter) and at home.She told the kids that their Dad didn't want them and that he had stopped paying her... all complete and utter lies... My partner and the kids were absolutely shocked by her behaviour but the kids believed that their Dad had stopped loving them, they wouldn't believe that their (normally great mum) would lie... my partner had to sit down with his teenage daughter (who was too young to understand what was really happening) and show her his bank statements and e-mails/texts to prove that their mum was lying (we tried reasoning with the mum, went 3 months without seeing the kids (her choice), gave her more money each month to pacify her, but nothing worked)... involving his daughter in adult communications and financial information was the last resort but.... it seemed to work... almost 3 years later... the situation has calmed down but the mother still does her best to cause trouble when she can... for me the light at the end of the tunnel is that his daughter finally understands that her Dad and I weren't the bad buys... her mum is jealous (her words)... When she was sending nasty e-mails about me (lies), I didn't retaliate.. i wanted to as I was really upset by what she was doing but realised that it would have made the situation worse. I wish she would have met me as she would have realised that I wasn't trying to take her kids away, I was just trying to be their friend... I genuinely admire you... you acted with self respect and dignity and your kids will grow up to be emotionally secure and stable as a result!!
Sally - 23-Aug-12 @ 4:42 PM
Title:
(never shown)
Firstname:
(never shown)
Surname:
(never shown)
Email:
(never shown)
Nickname:
(shown)
Comment:
Validate: