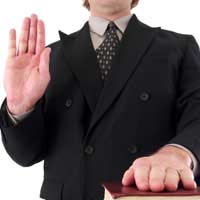 A person who is proven to have lied in evidence given court is guilty of perjury. The offence can only be made out if an individual has lied under oath. This can be particularly prevalent in the divorce courts. Emotions are running high, and litigants’ views on the ‘facts’ of the marriage and ensuing divorce can vary enormously. But if a person swears, on oath, that they will tell the truth, the whole truth, and nothing but the truth’ and then goes on to lie, they have committed perjury.

In divorce cases, however, it can be very difficult to prove. This is because very often the truth is only known between the two divorcing individuals, and that it is essentially one person’s word against the other.

There are, however, other cases in which it is possible to prove that an individual has lied under oath. In such situations the penalties are harsh. The problem in divorce cases is that the various authorities involved in the proceedings – the judge, the lawyers, and anyone else – may not care at all that your ex spouse has perjured themselves in the context of your divorce.

Often the financial amounts that are disclosed during the divorce proceedings are less than the reality. It is very common for divorcing couples to try to conceal assets and lower their income for the purpose of trying to ensure that the subsequent payout is much less than it otherwise should have been.

In extreme cases, your former spouse’s lawyer can also provide evidence on affidavit that these lies are true. Again, whether or not there is something that can be done to punish your ex or their lawyer depends on the seriousness of the act and whether or not it can be proved.

An Example of Perjury

In some extreme cases, however, it can mean that an individual is prosecuted and sent to prison for perjury. There have been numerous high profile cases of perjury in non-divorce cases. One lesser known example is that of a man who forged his wife’s signature on divorce documents (which alone would constitute Perverting The Course Of Justice), and then went to court to swear his evidence.

On oath, the man told the court that his wife had signed the petition but had decided not to have anything else to do with the divorce proceedings. On the strength of the evidence the man gave the court, the judge decided to annul the marriage and issued a decree absolute. Unfortunately, his former wife, who knew nothing of the divorce proceedings, contacted her own solicitor just weeks after the marriage was annulled. Very quickly she learned that she was already divorced and that her former husband had forged her signature and lied on oath to the divorce court in order to get the marriage annulled.

The police quickly intervened. A handwriting expert confirmed that the signature on the divorce documents was far more likely to have been written by the man. He pleaded guilty to perjury and was given a six month prison service, which was suspended for two years.

For more information on divorce proceedings, read our article on Divorce And Contempt of Court on this site.