Home > Case Studies > I Stayed Friends With My Ex: A Case Study

I Stayed Friends With My Ex: A Case Study 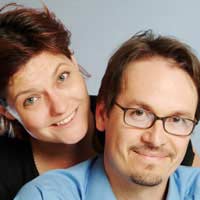 Mike, 31, split up with his wife three years ago and moved out of the family home. They have a 6-year-old daughter together and he says they have both made an effort, for her sake, to remain friends.

“Of course, it’s not how you hope things are going to work out. My parents divorced and I really didn’t want to put my daughter through that, but sometimes you just can’t make things work," Mike explained. "My ex and I would have split sooner if it wasn’t for our daughter, but we kept trying to make the marriage work so we could stay together as a family. When we finally came to the realisation that it wasn’t going to, I was heartbroken.”

“I moved to a flat on the other side of town and although it was only a 10-minute drive away, it felt like forever. Going from tucking your child into bed every night, to sitting there alone is a horrible experience. My ex, to her credit, was very understanding and agreed that I could come round and visit whenever I wanted, as long as I rang her beforehand.

“I think it helped enormously that we didn’t split up on bad terms. Yes, we fell out of love and didn’t want to be together anymore, but nobody cheated, lied or did something awful. It was really hard going round there, the place that used to be my home, and feeling like a bit of a stranger. My daughter kept asking when I was going to stay over again and that gave me a lump in my throat every time.”

Mike and his ex-wife managed to agree a visitation agreement without going to court and he believes that staying out of the legal system really helped them to work together, rather than against each other.

“There is no bitterness between me and my ex-wife. It was pretty much a mutual decision for us to end our marriage and there is no sense of blame. I also think that not involving lawyers helped a great deal. I have seen my friends battle it out with their exes and it’s not a pretty sight.

“Ultimately, my ex and I will always be joined by our daughter and we are both committed to putting her first. It wouldn’t be any good for her if we were arguing or fighting with each other (see our article on Hiding Arguments From Your Children). I am lucky that my ex realises I need to be a part of my daughter’s life and wouldn’t do anything to jeopardise that.

“I think that if people focus on what is really important – your child – then there would be less nastiness. It doesn’t benefit anyone and I know from my own experience of my parents splitting up, that children understand much more than you think they do. I mean, I don’t think we are ever going to be like Bruce Willis and Demi Moore, but we respect each other and our daughter enough to be friendly and mature.”

For information on keeping a good relationship with your ex, read our article How to Improve Relations With Your Child's Mother on this site.

How We Communicate Through Mediation: A Case Study
Share Your Story, Join the Discussion or Seek Advice..
[Add a Comment]
Hello, any info will be great so my friend and his ex split up and she got him arrested claimed assault he didn't do it and obviously the police said that too and also said to try and stay away from her as she is out to get him. They said he could go to the house whenever and see his son whenever just advised to go with someone so she couldn't lie anymore. He stayed away from the house been ringing and texting when to see son even his mother tried for him too no reply. It's not been a week since she rang the police and he decided to go up with his friend to get his stuff and see son as she is ignoring phone calls. When he got the all the locks have been changed which the mortgage is 50/50 hi name is on he is currently paying all the bills for gas electric water sky all the mortgage payments. What can he do where at a loss surely this isn't right and keeping his son from him !
Hh - 22-Dec-16 @ 5:25 PM
@Sam - I am going to post this article on our Separated Dads Facebook page, to see if our Facebook readers can help answer your question. Please refer to the page for answers. Our followers should be able to offer you some good advice, as many have been through similar issues and have come out of it the other side.
SeparatedDads - 4-Aug-15 @ 2:24 PM
After 10 years of marriage I found out the my wife had been seeing another man (but not committed adultery - although they had stayed overnight in numerous Premier Inns and Holiday Inns). As soon I found out I suggested that we consulted a marriage councillor, but she said there was nothing wrong and didn't need to see one. We have two boys 5 and 8. I have remained in our home but my wife says our marriage is over, she doesn't love me anymore and that she is now free to do what ever she wants and not need to tell what she is doing it where she is going. Although I would love to be able to cohabit for the sake of the boys my gut instinct is that this will deepen my depression (she has lied compusively for months and is still), risk providing an unstable environment for our children and prevent me from moving on in terms of developing another relationship with another woman. He's anyone cohabited instead of separating/divorcing? Does it get easier and are there any recommendations to make it work?
Sam10 - 2-Aug-15 @ 8:38 AM
I was dating a man for four years.hepromised me if our relationship eneded.he would stillbe there for my son. 22 years later. he is still there!He has beenthe male role model for him!. and he has been always upportive!My son is lucky !We just celebrated my son's bday together
muneca - 13-Oct-12 @ 5:10 PM
Title:
(never shown)
Firstname:
(never shown)
Surname:
(never shown)
Email:
(never shown)
Nickname:
(shown)
Comment:
Validate: