Home > Emotional > Maintain a Bond When Visitation Rights are Infrequent

Maintain a Bond When Visitation Rights are Infrequent 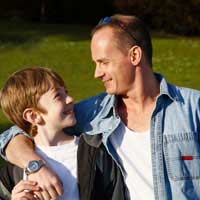 One of the most heartbreaking things that can happen is for a divorced or separated father to only have infrequent in-person contact with his kids. Where a contact order is in place and adhered to, the usual reason behind all this is distance – either the father’s had to move for work or personal reasons, or the mother’s moved. Whatever the cause, it means that the father doesn’t get to see his kids often, and can’t fully share in the joys of them growing up and their daily lives.

If your original contact order was for the kids to spend every other weekend (or possibly even more) with you, and circumstances change so that’s no longer practical, it might be possible to change the contact order – this is especially true if your ex has moved.

Try to negotiate a change so that, although the kids aren’t with you as often, it can be for longer blocks of time during the holidays. You’ll need to change your work schedule, but with notice that’s not a problem for most people, and the majority of fathers will willingly do that in order to have time with their children.

If you have a reasonable relationship with your ex, there’s a very good chance you can reach an agreement that suits you both. Depending on the distance, you could have them for a week at a time, or even longer. If the move has taken them (or you) abroad, then during the summer holidays for a few weeks would make an ideal time. You need to be sure you have proper, legal, written permission from the mother for the children to travel, and those children under the age of 12 who are flying without an adult will be doing so as “unaccompanied minors”. Many airlines have special arrangements for this group, but you’ll need to ask your individual airline. It generally costs a little extra, but it’s worth the money for the peace of mind.

As anyone who’s gone through it can testify, there are pluses and minuses to being a holiday dad rather than a weekend dad. You get a long period when you get to know your kids well all over again and really enjoy them, as well as the luxury of time to do things. The downside is that you end up just seeing them a few times a year – in some cases, just once for a long period in the summer, so you miss out on the smaller, daily things.

Not being physically close to your kids doesn’t mean you can’t keep in touch, however. These days most kids use mobile phones, as well as email and instant messaging. They’re used to being in constant touch with their friends, and there’s no reason you can’t take advantage of that. Call them on their mobiles for a chat after school, at home in the evening when they’re more relaxed, or get online and talk to them or send them emails. Ask questions about the things that matter to them, keep up with the things that are happening at school and at home. Remember, too, that snail mail is good for sending presents. They don’t have to be large, just reminders that you’re thinking of them.

If you’re on good terms with your ex, talk to her periodically to receive a more objective opinion on how the children are faring at school and otherwise.

It’s true that it’s not the same as being together. But where that can’t happen, it’s a good substitute. Even five minutes a day keeps you in touch, and reminds your kids that you love them.